The continuing adventures of life with Abby Cat and Tomboy!

It all started when Abby Cat, then an “only cat”, got a new toy…….she named him Rat. I detected a certain attitude in her selection of his name. Maybe there is something to the theory of the importance of a name, because Abby Cat didn’t care one hoot about Rat; she totally ignored him……until…..

As you can see this was back when Rat still had a tail. I never knew what unfortunate accident happened that denied him one of his most important physical characteristics. Have you ever seen a rat without a tail? I haven’t. However, I will admit when I see a rat,  I rarely stay around long enough to observe the details.

When Tomboy joined our family, nothing changed. Apparently he saw nothing redeeming about “Rat”, either. He never played with Rat or in any way acknowledged his existence. Then I began to notice a pattern emerge in Rat’s life; yes, nothing had changed…..until…… 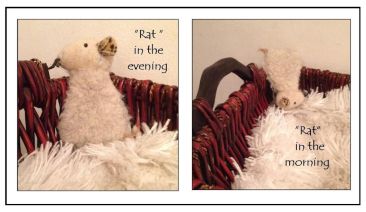 It is always the same;at night I put Rat in a dignified position with his head up and the next morning he is standing on his head.

What is it about Rat? Only Abby Cat, Tomboy and Rat really know. I sure don’t!