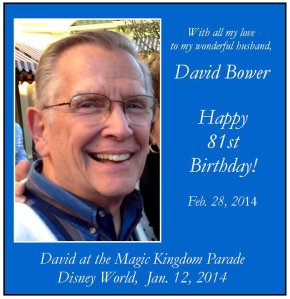 Yes, it’s HIS birthday and no less than his 81st. Impressive!

For the entire month of February he has been invoking his privilege of being “The Birthday Boy” by bringing home from the store all his favorites denied him the rest of the year. (Don’t believe that story for a minute! He does all the shopping!) He has brought home brownies, iced with rich white frosting, ice cream, huge cinnamon rolls covered with thick white icing, large bags of roasted almonds and ordered Dominoes pizza delivered.  He even announced to me after a lovely dinner at Carrabbas, complete with a rich, chocolate dessert of some title, he was going to stop by the store on our way home. He came out with cookies, 100 in the package for only $10.

But the moment I began to feel guilty for having given up baking when our children left for college then got married…(all married within 9 months of each other, by the way! That will be another blog!) was when he brought home his”Birthday Cake” this week. 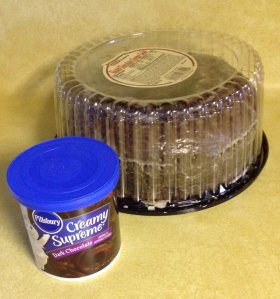 Hey, there’s nothing too good for my husband’s birthday, is there? Actually, he bought them himself yesterday. I asked him why he didn’t buy the nonpareils. Our children will understand and laugh at that question. I used to bake and never failed to top off “whatever” with multicolored nonpareils. Done!

Nonpareils on everything was a tradition at our house as were artificial flowers. I learned early on that a bunch of plastic flowers or one or two alone, strategically placed here and there, could bring a certain élan  to our “They had the same furniture while in college” decor. Once I discovered a neat little hole in the sheet rock wall in our breakfast room. Our daughter said “Stick a flower in it, Mom!” which I did. Problem solved and with creativity.

Back to “The Birthday Boy”; I could not be more proud of him. Upon retiring ten years ago he re-entered Dallas Theological Seminary and completed his studies started way back years ago. In 2009 he graduated, walked across the stage and everything, at the DTS Commencement. When he received his beautiful Diploma in the mail a few days later he came running in to tell me he had graduated first in his class, With Highest Honors. He added the caveat, “But don’t tell anyone.” Who me?

Since March 2012 he has been diligently working many hours every day as an online Missionary for Global Media Outreach, teaching and counseling hundreds across the world. He is incredibly devoted to his ministry to our Lord Jesus Christ.

David is also a highly competent electronics audio/visual hobbiest, having worked his way through several years of college in the field, custom designing home systems. He keeps up with every new trend in electronics. (But I had an iPhone before he did! Ha!) AND he is our resident computer guru. When my computer acts up I just yell “David”. When he enters the room it corrects itself. No kidding. Ask him. I think my computer is afraid of him. He can be tough when needed, just ask our children and Grands.

I know my blog is advertised as an art blog, but David did pay for me to go to college and art school. Justified!

I could go on, but I need to go buy some nonpareils or I could send David to H.E.B.