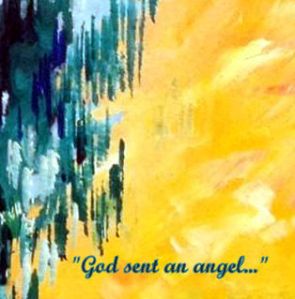 “David looked up and saw the angel of the Lord standing between heaven and earth, with a drawn sword in his hand extended over Jerusalem. Then David and the elders, clothed in sackcloth, fell face down.”  1 Chronicles 21:16

This verse from 1 Chronicles 21 may seem like a strange memory verse for April. Where is the sweetness and light? Where is the applicable motivation? What am I to make of this story? I want easy words to live by…..don’t I?

I chose it for its powerful message and lessons.

All the questions above are valid, but when I read this chapter of 1 Chronicles I was very, very impressed….even after having read it many times before. Read this Old Testament chapter again, just to refresh your memory.

To summarize the story:

David was incited by Satan to sin against the Lord by counting the people of Israel. He knew it was wrong but did it anyway. This was evil in the sight of the Lord. The Lord gave David three options for his punishment. He chose “…three days of the sword of the Lord-days of plague on the land, with the angel of the Lord ravaging every part of Israel”. Seventy thousand fell dead in Israel. Then God sent the angel to destroy Jerusalem.

Lesson #1: Satan is real. The Lord God is totally holy. He is sovereign and does all things according to His will. Sin has consequences.

The story continues: The Lord saw all that was happening and was grieved because of the calamity and said to the angel who was destroying the people…..“Enough! Withdraw your hand”. (vv.14-15) After David confessed his sin, the Lord told him to build an altar of burnt offerings on the threshing floor of a man named Araunah.

Lesson #2: Our Lord is compassionate. He provides a way of repentance.

At this time, Araunah, the Jebusite, was quietly at work threshing wheat with his four sons. He turned and saw the angel; in fear and terror his four sons hid themselves……then, to add to the drama of the moment, David, the King walked onto the scene. Can you imagine Araunah’s shock? I can’t. Araunah bowed down in front of David with his face to the ground. What a scene; the angel of the Lord with a drawn sword and the King of Israel….all right there together.

Then the angel of the Lord was standing at the threshing floor of Araunah, the Jebusite. “David looked up and saw the angel of the Lord standing between heaven and earth, with a drawn sword in his hand extended over Jerusalem. Then David and the elders, clothed in sackcloth, fell face down.”  1 Chronicles 21:16. David pleaded with the Lord to bring the punishment on him alone, not the innocent people.

Lesson #3: Never underestimate the angel of the Lord; never think he is a sweet, little, chubby, blond baby..flying around ready to encourage you every now and then. No. Most people in the Old Testament fell to the ground, some lost consciousness at the sight of an angel of the Lord.

To conclude the story, David purchased the threshing floor and built the altar the Lord had instructed him to do. And oh, how I love this verse:  “Then the Lord spoke to the angel, and he put his sword back into its sheath.” (v. 27)

Lesson #4: Our Lord God is all powerful, all mighty, and fully in charge of everything. He is to be obeyed.

“But David could not go before it [the altar] to inquire of God, because he was afraid of the sword of the angel of the Lord.” (v.30)

6 thoughts on “A Scary Story”