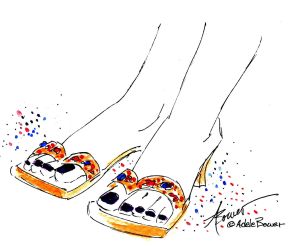 How The Club Began!

(A true story; I’ve changed the names to protect myself!)

It all became clear that day on the bus. I finally had a label to pin on an idea that had been in my head for a long time. The idea had begun to collect in the recesses of my brain several years back. I’m not sure when it all started. If I had kept a notepad in my purse to record my astute observations and insights through the years, it would be full by now. I would be well on my way to writing a book on the subject.

It was a lovely spring day. Mabel and I were among a group from our church on our way to a two-day inspirational and educational women’s event in a town about two hundred miles north. Everyone was in high spirits chatting away as the bus left our church parking lot. We even had our brown bag lunches and iced-down soft drinks ready to enjoy when the time came.
Mabel and I chose seats near the back of the bus. We left a few vacant rows between us and the rest of the ladies. I’ve thought about that a few times since then. Why did we choose to sit a little separate from the other women? I think I know now, but I’ll save that for later.

Mabel and I are good friends and we had lots to talk about. But soon our attention was drawn to the conversation going on at the front of the bus. The group leader was standing in the aisle at front more or less leading the informal topic. The topic was how old certain famous Christian women leaders look now, and what they are doing to try to look younger. What? Mabel and I looked at each other in disbelief. But, we kept listening, of course. Apparently the subject was a favorite judging from all the laughter and willing participation.

After listening with rapt attention for several miles it occurred to me that Mabel and I were the oldest women on board the bus…..by far. Should I put a stop to this before it goes too far? Wouldn’t they be embarrassed if they looked back at us two “Senior” church ladies? Now, mind you, neither Mabel nor I have indulged in plastic surgery but we still look pretty good. We do use makeup and deodorant! We even wear those sparkly, brightly colored open-toed sandals…….without hose. What more can you ask?

Deciding to break in to their conversation seemed like a good idea, before Mabel and I got really angry. So, I bravely called out “Hello. Are we invisible back here?” Utter silence. I continued “Mabel and I are both older than the women you are discussing.” Even quieter than before. Then we could hear quiet chuckles, shifting in the seats, rustling of papers. Then someone said “Time for lunch.”

Attention quickly turned to our sandwiches and drinks and conversation was at a minimum. By the way, to this day Mabel still brags about how much food she brought for the two of us. It was her idea, not mine. But I enjoyed it all weekend.

Maybe it was the rise in my blood sugar that cleared my head. But suddenly it came to me. My long-held thesis was taking shape and actually had a title. Here it is: The Invisible Woman’s Club. And Mabel and I are members. Since I’m the first to give it a label or title, I think I should be the President.

Mabel and I talked the rest of the way to the city up north. The younger ladies were rather quiet.

10 thoughts on “The Invisible Woman’s Club”